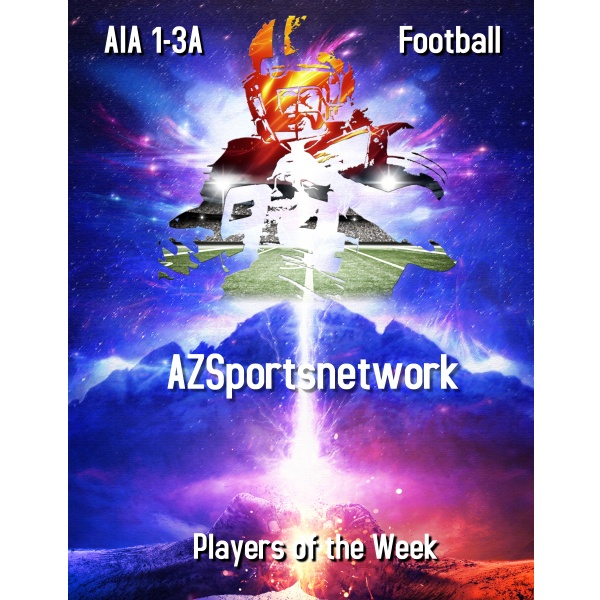 AZSportsnetwork AIA 1-3A Week 5 Football Players of the Week

AZSportsnetwork AIA 1A Players of the Week 5

go on to defeat Anthem Prep 54-28 to win a crucial region West Game!

In limited playing time vs Mayer, Bryton Cox showed why he is one of the

most dominant DL in 1A Football.

AZSportsnetwork AIA 2A Players of the Week 5

While there may be many reasons as to why Camp Verde is still undefeated in the AIA 2 A Division,

one of the main reasons is the 6’1 175lb WR Christian Sanabria! His stat line in a win vs Trivium Prep catapulted

him to be the states leader in yards and TDs after just 4 games in the 2022 season.

Globe Defense: The Globe Defense had the undaunted task of trying to stop Alchesay Powerful

Double Wing Offense attack which is one of the best in the State of AZ! The Globe defense was up to

With Valley Lutheran looking to tie up the game and head into OT with some momentum, Jorge Lopez along with

AZSportsnetwork AIA 3A Players of the Week 5

3A QBs to watch this season! With #1 Thatcher now 4-0 Napier has without a doubt

shown this prediction to be true. Facing their rival Safford Napier exploded for 4 TDs

to show that he can take control of a game all by himself. With one of the top OL in

all of 3A Brandon Napier was able to lead his team to a 40-2 victory!

to 3-2 on the season. This has included 3 shutouts in a row!

Tyler Nolan had an excellent game vs Benson that helped lead them to a 59-0 victory. To